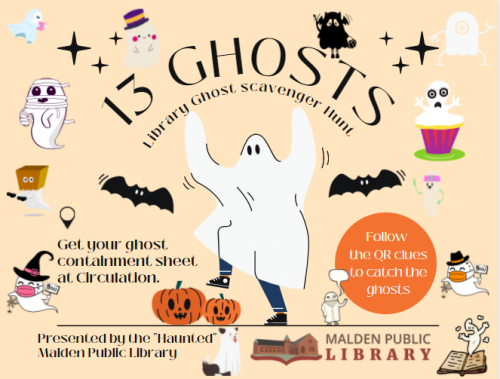 The library is HAUNTED!!! 13 ghosts have moved into the stacks. Help the library catch and catalog these ghostly visitors by following the clues to each individual ghost and logging them on our Ghost Containment sheet. Once you’ve found all 13 ghosts bring the sheet to the Circulation desk and get a prize.

This program is best enjoyed with a cell phone QR code scanner, but there are printed clues with each ghost so don’t let technology get in the way of a ghostly good time!These ghosts are only here until the candy runs out, so come by for a little scavenger hunt fun! 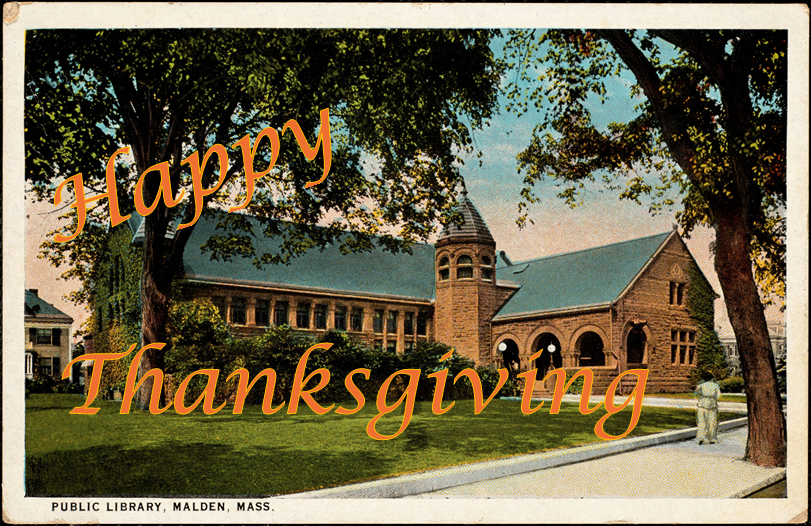 The staff of the Malden Public Library wishes you a happy, healthy and safe Thanksgiving. We’ve made a list of some cookbooks you might want to check out to find inspiring recipes for this holiday and all the winter holidays to come. So follow the link to Bibliocommons and see what amazing dishes you can make!

Also be sure to watch our special edition of 5 in 5 at noon today, 11/24. In it some of the staff will reminisce about their favorite dishes and Thanksgiving recipes.

Also the library will be closed Thursday, 11/26, for the Thanksgiving holiday. But we will be back on Friday, 11/27, for curbside delivery and to answer your questions via phone. 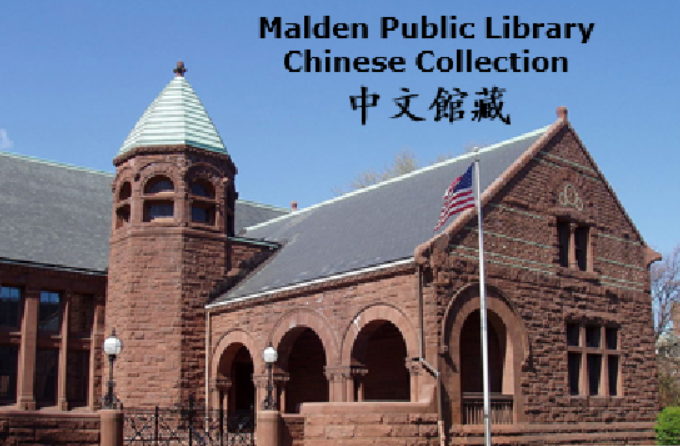 Here is the next video in our 5 in 5 series. Cait provides today’s list of recommendations . She is recommending horror titles to get you in the mood for Halloween. You can request these items for pick up or download from our Bibliocommons list or call us to place a hold. And you can watch the video premiere at 12:15 pm on our YouTube channel below. Don’t forget to subscribe to our social media to get the latest updates, events, and recommendations. 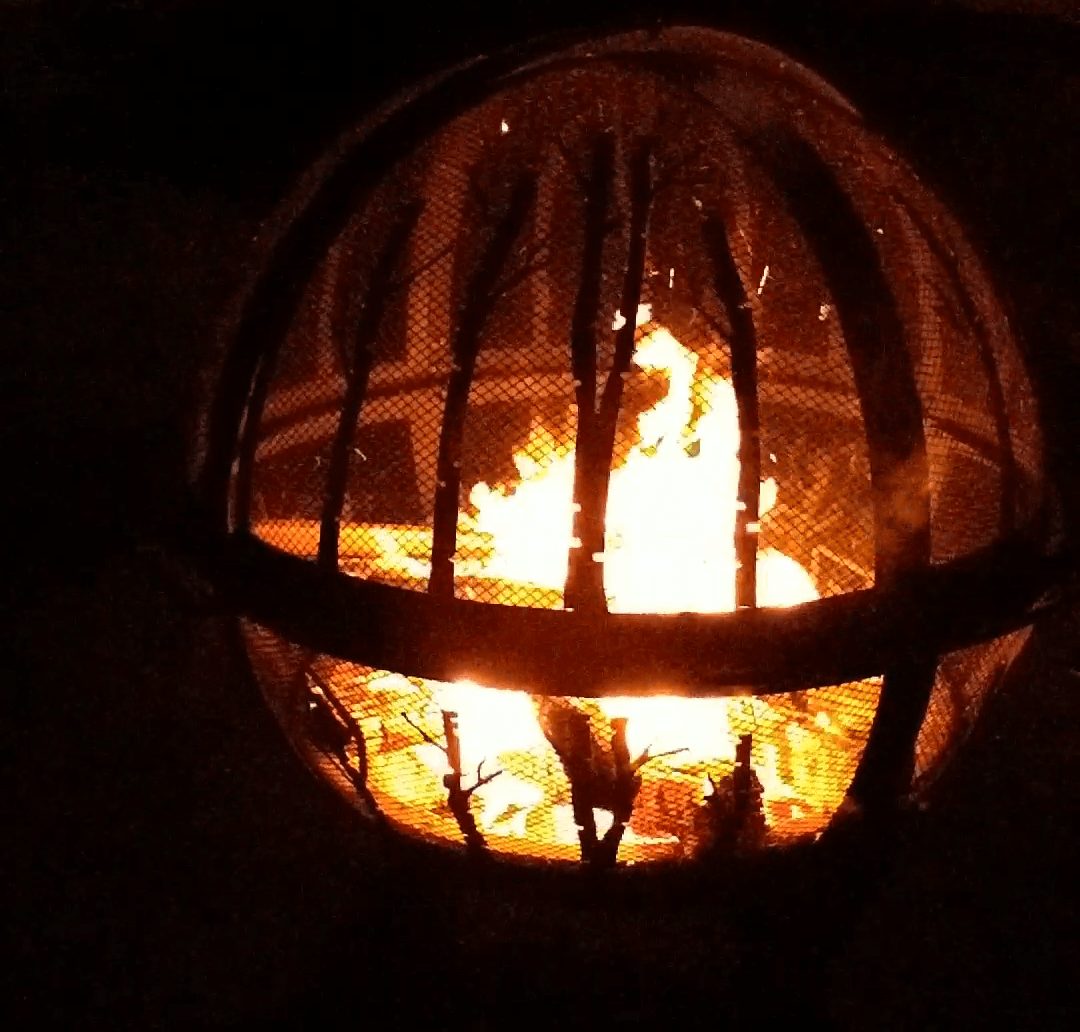 How could we possibly miss out on the spookiest month of the year to tell campfire stories?! We here at MPL Campfire Ghost Stories are most definitely October people in the Bradbury sense. And with the sun setting earlier, the leaves falling on the shady paths, and the early morning chill that frosts the grass has reinvigorated that Halloween spirit. So we are back with weekly readings of the spooky, the scary, the disturbing and the sometimes weird.

So if you are looking to reconnect with your Halloween spirit, or just need a good playlist while you decorate your cobwebs listen to our YouTube playlist and be sure to tune in each Thursday at 7pm for new haunting tales. 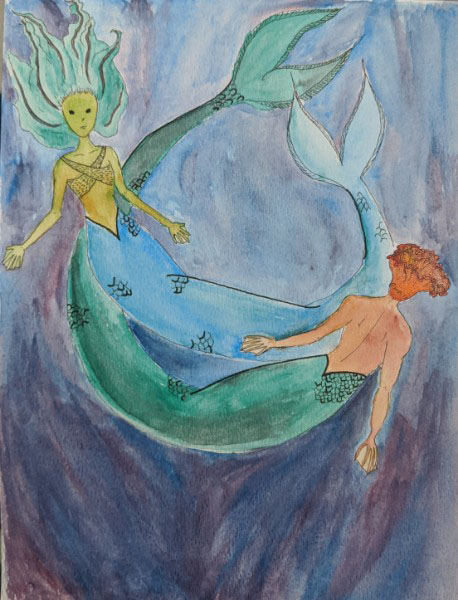 If you missed our first ever panel discussion about myth, fairy tales, film, and storytelling you can watch the whole event on YouTube.

Please help support our wonderful creative communities and join us for our panels, public readings, and other library events. We are hoping to bring you more of these unique events in the Fall while highlighting the rich creative traditions of our Malden community.

Also subscribe to our YouTube channel to stay up to date on our latest videos and events! 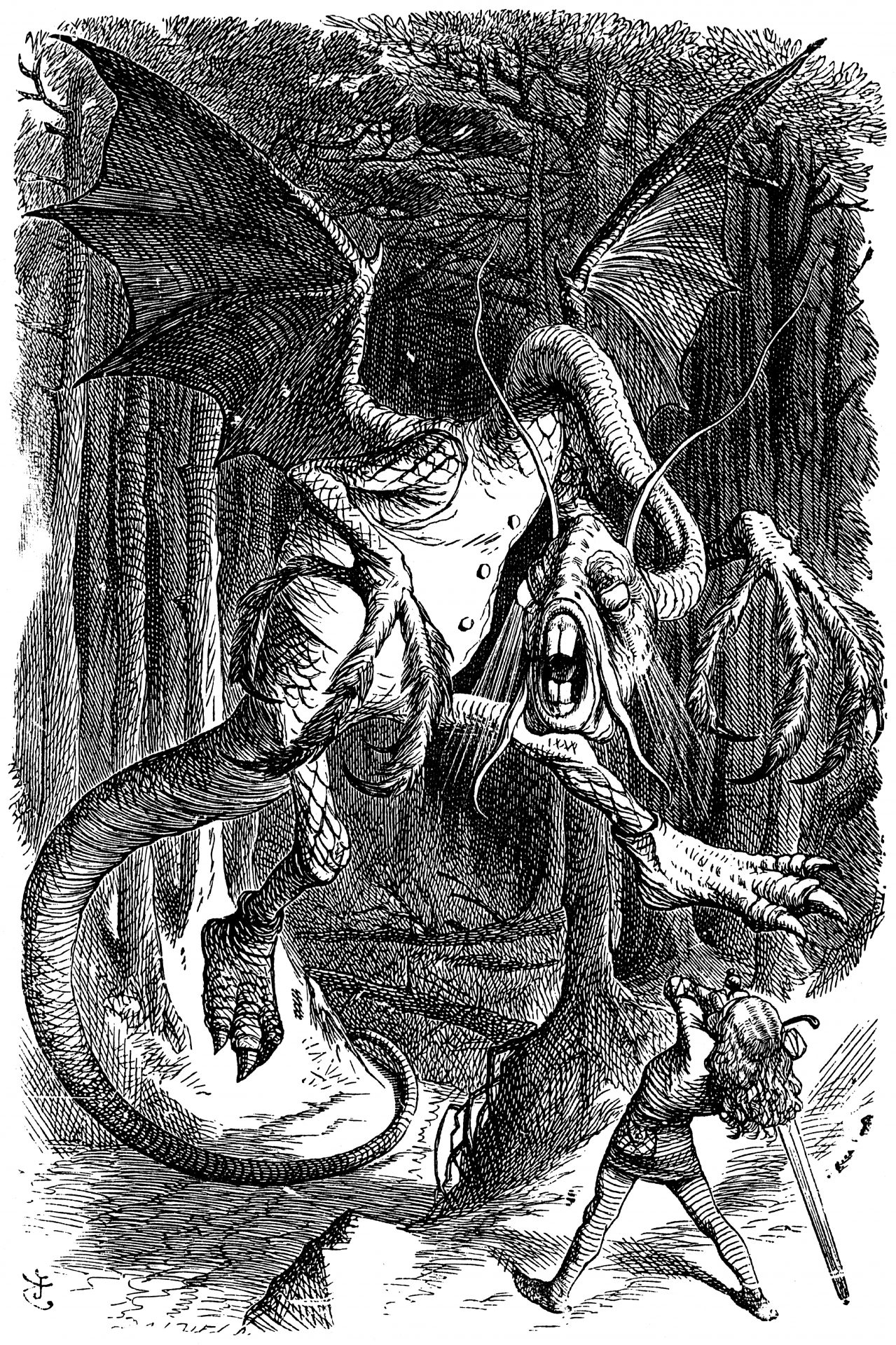 Spend your Friday afternoons with the staff at the Malden Public Library reading you grown up folk and fairy tales. Listen to heros, heroines, tragic lovers, transformed travelers, and dancers with the devil as they meet challenges and overcome them. Let us tell you a story and while we are at it inspire you to take another look at your own challenges with fresh eyes and renewed purpose. Books and stories are our road maps to the struggles that always face human kind. And fairy tales take those struggles and distill them down to their essential matter, hide them in a bit of the fantastic, and then give us the strength and inspiration to push on no matter how big the dragon or how large our pile of straw becomes.

We’ll post new readings every Friday at 1215pm, you can catch the link on our calendar or Facebook event listing. You can also listen and watch on our Youtube channel or find our playlist and catch up on the stories you missed.

And check out our Fall offerings when they arrive. As with most adventures things may change and new challenges may come so check back with us to see where we’ve gotten to on our journey. 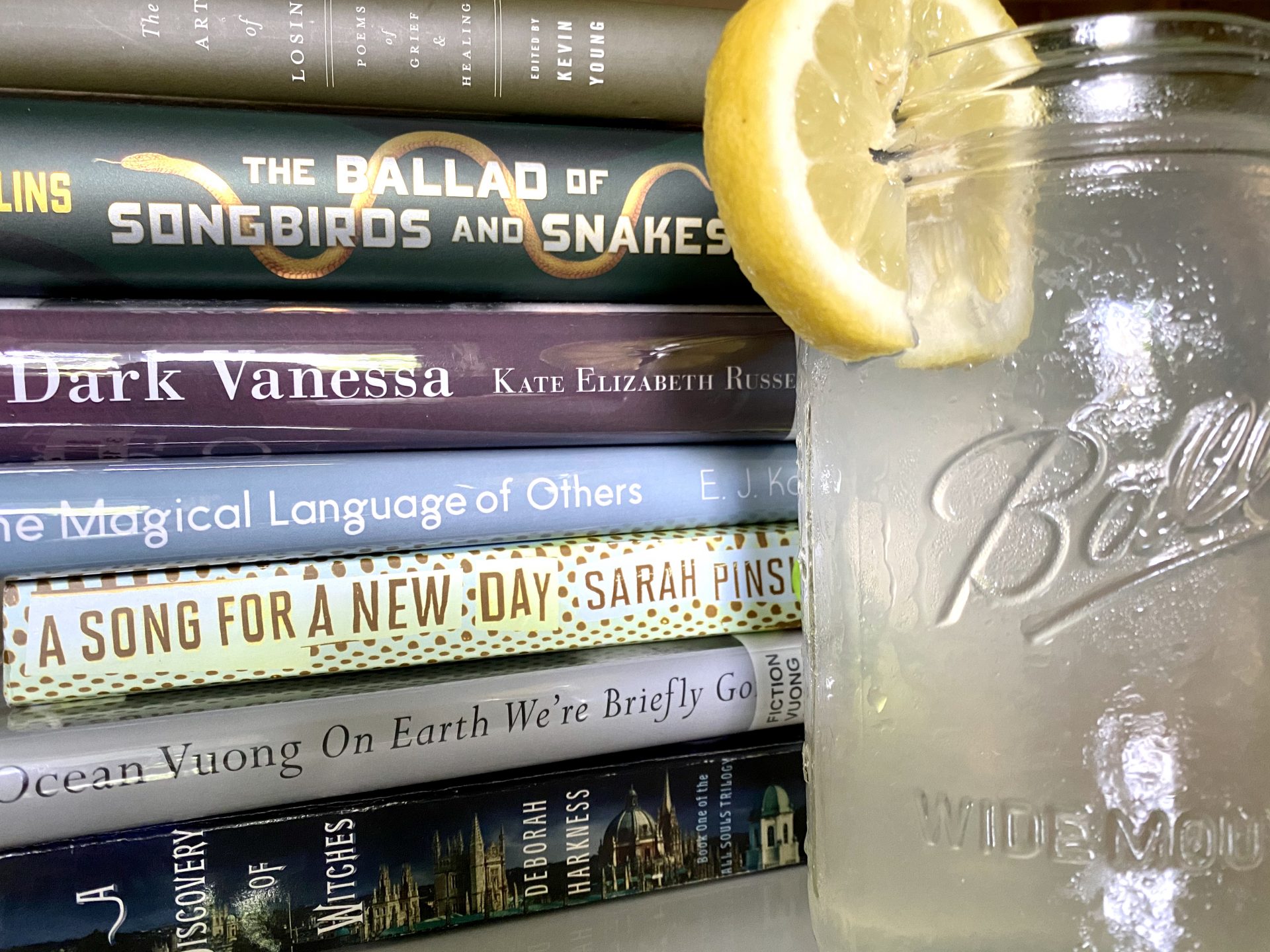 Looking for your next summer read? Or do you have a book you are dying to share with people? Spend an hour with some book lovers and librarians to talk about the books you loved, books you hated, or get some first hand recommendations for new books to try. There are multiple upcoming dates so check here to see when you can drop by on Zoom for a chat with some fellow readers.

Links to this Zoom program are typically posted 5-15 minutes prior to the event and can be reached by clicking on the event on our calendar or by following the Zoom link posted on the FB event page. If you have trouble accessing Zoom or this program you can call the library during our hours of operation and a librarian will be happy to help you.

Check back for more dates in September. And look for our updated book recommendations from each session posted to our social media. 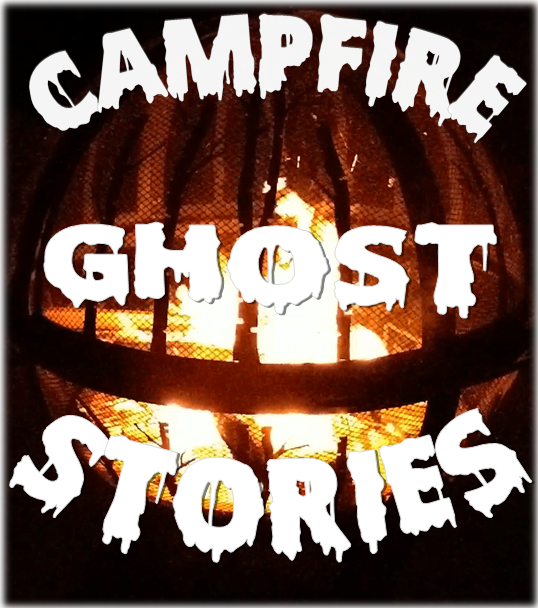 Horror fans, podcast ghouls, and people who love a good scare before bedtime join us for virtual campfire ghost stories. If you were a fan of Are You Afraid of the Dark? or are missing the feeling of a chilly night with a good fire under the stars then these are the tales for you! Haunted tales told with a virtual fire crackling in the background; we will scare you, delight you, and hopefully lull you into a night of uneasy dreams. Muhahaha.

After each creepy episode you can come back here to relive the stories or catch up on stories you might have missed. In fact here comes one right now!