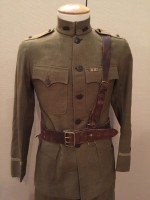 The Malden Historical Society has announced that it will extend the exhibition “Uniforms: Dressing the Part” at the Malden Public Library’s Converse Building  on a limited basis. The exhibit, scheduled to close before Christmas, will be open on Wednesdays 2:00 -4:00 pm starting in January. Groups wishing a different time or individualized showing should contact the Society at 781-338-9365.

On exhibit are a variety of uniforms including a Civil War coat, the WW I uniform of Mayor John Devir, Vietnam era uniforms of  Navy ace “Buzzie” Burnett and a WWI Navy uniform. Other “uniforms” include Malden High and Malden Catholic High outfits; girl scout leader, suffragette, and nursing outfits, as well as others not usually classified as uniforms.