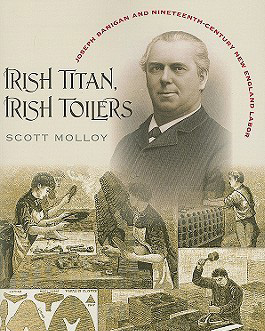 Joseph Banigan was a refugee with his family from the Great Famine in 1847. With a year of elementary school he became a full time child laborer but with pluck and luck climbed the ladder of success as a producer of rubber footwear along with colleagues in Massachusetts and Connecticut. He eventually became president of the US Rubber Company.  Joseph Banigan was also a generous contributor to the Catholic Church, orphanages, and other non-sectarian charities. He was named a Knight of St. Gregory by Pope Leo XIII in 1885. Banigan also engaged another kind of knighthood: a bitter six month strike by the Irish Knights of Labor that same year at one of his rubber factories in Millville, MA.

Dr. Scott Molloy taught labor relations at the University of Rhode Island for thirty years, including labor and Irish history. The Carnegie Foundation acclaimed him the best professor in the state in 2005. He was Teacher of the Year at URI in 1996, and the Smithsonian Institution acquired his collection of 10,000 labor union items a few years earlier. He is in the Rhode Island Hall of Fame and served as the Grand Marshall of the Providence St. Patrick’s Day Parade last year.

The program is part of the Go Local Converse 2020 Series exploring the industrial history of Malden and brought to you with federal funds provided by the Institute of Museum and Library Services and administered by the Massachusetts Board of Library Commissioners.  For more information about this program or others in the series contact the library at 781-324-0218 or check out the library’s events calendar at www.maldenpubliclibrary.org.