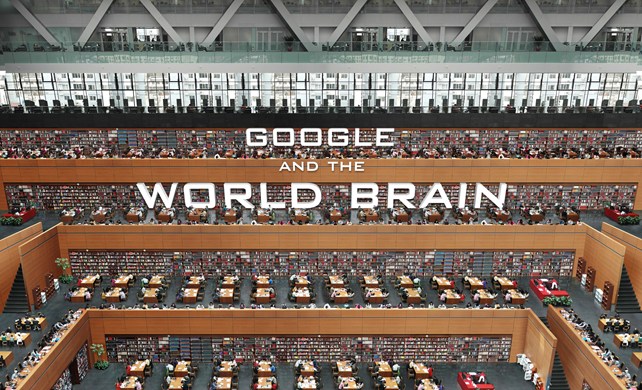 Join us on Wednesday, March 25, 2015 at 6:00-8:30pm in the Maccario Room for the Malden Public Library’s second Malden Reads film screening. We will be showing Google And The World Brain, a movie which explores some of the themes in Mr. Penumbra’s 24-Hour Bookstore—the power of books, technology, and knowledge, new and old.

Google And The World Brain “…is the story of Google’s most ambitious project ever and the people who are trying to stop it. In 2002 Google began to scan millions of books in an effort to create a giant global library, containing every book in existence.” They scanned these books illegally without respecting copyright laws. Is Google stealing library books? Please join us for a discussion.

Lucas McNelly of The Huffington Post writes about that the film is “endlessly fascinating and engaging. It’s probably the best documentary you’ll see all year.” Julie Fischer ofIndiewire writes that Google And The World Brain is “a masterful documentary.”

The discussion of this year’s Malden Reads book selection, Mr. Penumbra’s 24-Hour Bookstore will follow the movie. This film is free and open to the public and is accessible. Please call us at 781-324-0218 for more information.