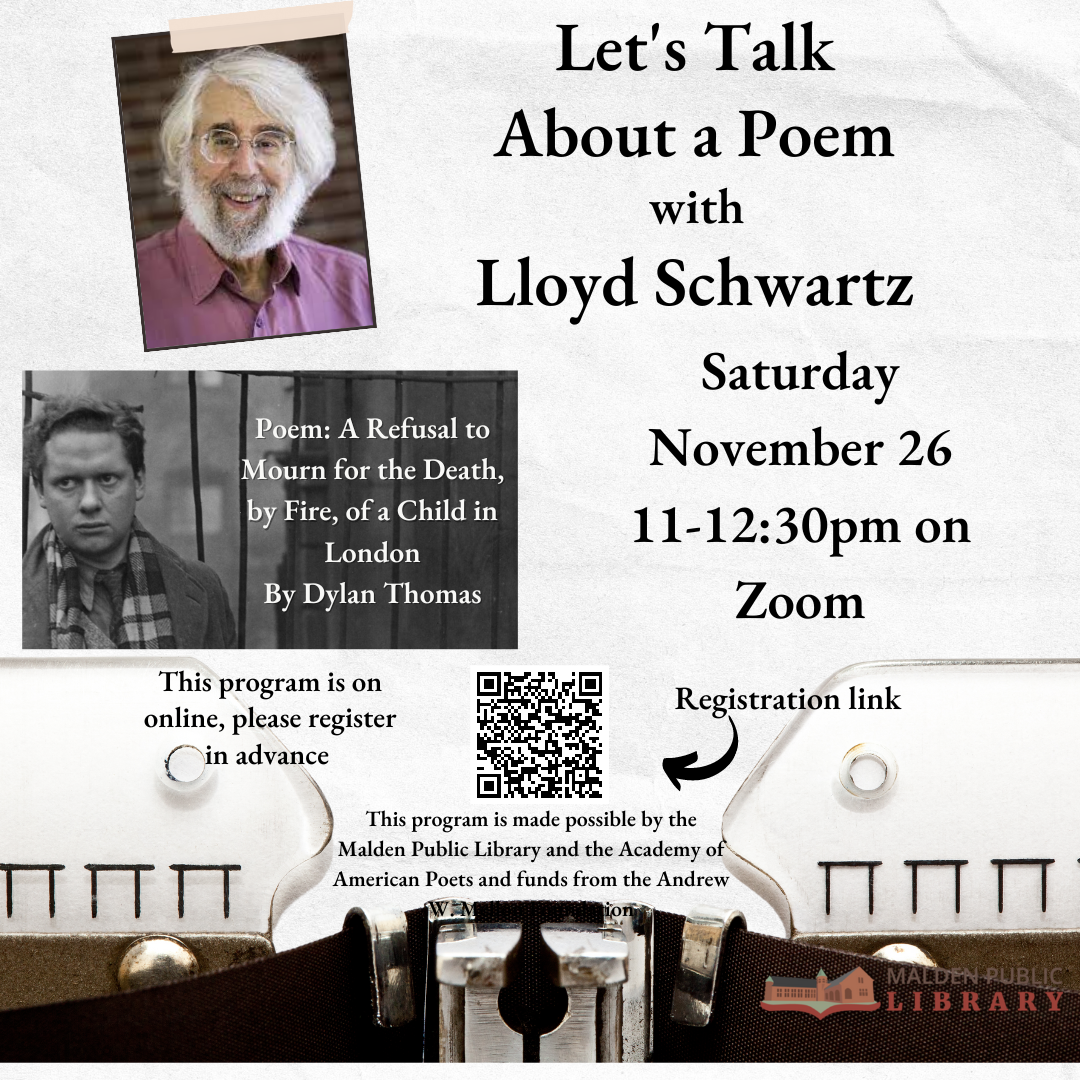 Join Lloyd Schwartz and the Malden Library on Zoom to talk about the poem: “A Refusal to Mourn for the Death, by Fire, of a Child in London” By Dylan Thomas. Registration is requested. To get your Zoom invite by following this link to register:  http://bit.ly/3AxS94O

Lloyd Schwartz is an American poet and lives and writes in the Boston area.

“His collections of poetry include Who’s on First? New and Selected Poems (2021), Little Kisses (2017), Cairo Traffic (2000), Goodnight, Gracie (1992), and These People (1981). His poetry has also been featured in the anthologies Best American Poetry (1991, 1994, 2019), The Best of the Best American Poetry (2013), and Essential Pleasures: A New Anthology of Poems to Read Aloud (2009). His poems have appeared in the New Yorker, Poetry magazine, the Atlantic, the New Republic, Paris Review, Kenyon Review, Agni, Consequence, Ploughshares, and elsewhere.  Schwartz is the editor of Prose: Elizabeth Bishop (2011) and coeditor of Elizabeth Bishop and Her Art (1983) and of the Library of America’s Elizabeth Bishop: Poems, Prose, and Letters (2008).

Schwartz also served as the classical music editor of the Boston Phoenix. Three-time winner of the American Society of Composers, Authors, and Publishers (ASCAP) Deems Taylor Awards, he has received a Professional Music Fraternity’s Radio and Television Award as well as support from the Amphion Foundation. Music In—and On—the Air (2013) offers a selection of his classical music criticism for the National Public Radio program Fresh Air.

Schwartz’s poems have been selected for the Pushcart Prize. Additional honors include a Pulitzer Prize for criticism, grants from the National Endowment for the Arts and the Somerville Arts Council, an Associates of the Boston Public Library Literary Lights Award, and a 2019 Guggenheim Foundation Fellowship in Poetry. Schwartz has served on the executive board of PEN New England and is Frederick S. Troy Professor of English at the University of Massachusetts in Boston, where he has served as director of the creative writing program. He lives in Somerville, Massachusetts, where he was the Poet Laureate of the City of Somerville from 2019 to 2021.”–Poetry Foundation

This program is made possible by the Malden Public Library and the Academy of American Poets and funds from the Andrew W. Mellon Foundation