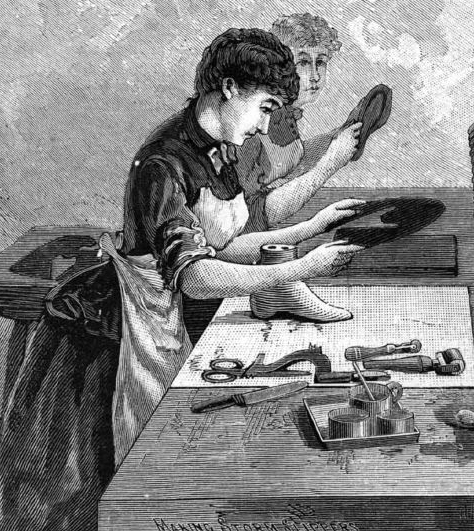 On Monday, September 9th at 6:30 p.m., join us for “Heart and Sole: The Lives of Malden Factory Workers,” presented by local historian Dee Morris.  From 1853 into the 20th century, the Boston Rubber Shoe Company brought increasing prosperity to Malden. This community of employees ranged from highly-skilled boot makers to laborers. Shippers and teamsters maintained the flow while office personnel kept track of everything else. Siblings worked here as did women, newcomers from Ireland and a teenager named Alvan T. Fuller, who would later become Governor of Massachusetts.  Join us for a tribute to their meaningful lives.

Dee Morris is an independent scholar and educational consultant specializing in 19th-century history of Greater Boston.  She presents walking tours at Forest Hills Cemetery and programs at libraries, schools, and historical societies.  Her goal is to connect people with their civic ancestors.

This lecture is part of Go Local: Converse 2020, an ongoing series celebrating the life and philanthropic contributions of Malden’s first mayor Elisha Slade Converse and the industrial history of Malden.   Go Local is brought to Malden with federal funds provided by the Institute of Museum and Library Services and administered by the Massachusetts Board of Library Commissioners.  The series will continue through Elisha Converse’s 200th Birthday on July 28, 2020.