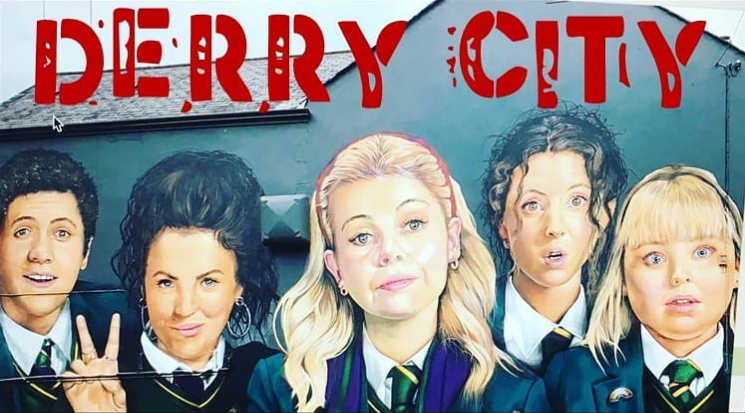 Click here for the YouTube live stream.
Derry, Northern Ireland: with a Catholic majority stretching back to the mid-1800s, Derry played an important role in the civil rights movement and the Troubles, a violent conflict with all the characteristics of a civil war. The people of Derry are a living record of the turmoil, triumphs, and everything in between which rocked their community at that time. Whether you know Derry from the hit Netflix show Derry Girls or not at all, the city has a rich history.  Dr. Margo Shea will join the Malden Public library to delve into the historical record (virtually) in her new book Derry City: Memory and Political Struggle in Northern Ireland, exploring the streets and neighborhoods that have become familiar to many through tv, film, and family lore. Come join us on September 3, 2020 and learn about the people and places behind this great city, whether you are just hearing about it from Derry Girls, from your history book, or from your great uncle’s stories of the Troubles.

Book talk will be followed by a brief Q&A with Librarian Lily and Dr. Shea. You can ask your own questions of the author in the comments section on YouTube or in the discussion thread on the Facebook event post.

About our author, Margo Shea

“I am an educator, researcher and project administrator with experience in reflective participatory research, civic engagement, service-learning, community development, storytelling and all the ways these intersect and intertwine around historical, social and political issues. I am trained in urban studies, public and oral history, qualitative research methods and (some of) the digital humanities. I am the author of a history of community memory in #Derry, Northern Ireland published by University of Notre Dame Press, called Derry City. At the heart of my work is a firm belief that for much too long, most of us have been mere subjects of history instead of actors and writers of our stories. I work in all of my roles to change that. I work to strengthen our individual and collective ability and resolve to listen into the difficult spaces and to create processes for listening to shape our stories and our actions. Collaborative practice, (planning it, facilitating it, organizing it, evaluating it and amplifying it) while honoring individual perspectives and where they come from, is my strength. ”

And if you are interested in learning more or would like to read the book on your own. Check out the link to order a hardcover copy. HINT: go to  the author’s site for discount codes and release information about future trade paperback editions.

“Derry is the second largest city in Northern Ireland and has had a Catholic majority since 1850. It was witness to some of the most important events of the civil rights movement and the Troubles. Derry City examines Catholic Derry from the turn of the twentieth century to the end of the 1960s and the start of the Troubles. Plotting the relationships between community memory and historic change, Margo Shea provides a rich and nuanced account of the cultural, political, and social history of Derry using archival research, oral histories, landscape analysis, and public discourse. Looking through the lens of the memories Catholics cultivated and nurtured as well as those they contested, she illuminates Derry’s Catholics’ understandings of themselves and their Irish cultural and political identities through the decades that saw Home Rule, Partition, and four significant political redistricting schemes designed to maintain unionist political majorities in the largely Catholic and nationalist city. Shea weaves local history sources, community folklore, and political discourse together to demonstrate how people maintain their agency in the midst of political and cultural conflict. As a result, the book invites a reconsideration of the genesis of the Troubles and reframes discussions of the “problem” of Irish memory. It will be of interest to anyone interested in Derry and to students and scholars of memory, modern and contemporary British and Irish history, public history, the history of colonization, and popular cultural history.”