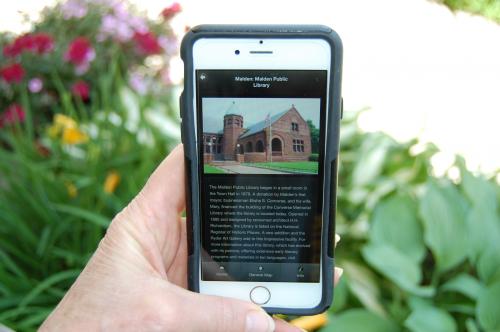 Recognizing the integral role that public libraries play in their communities, Massachusetts Center for the Book (MCB) has added Malden as a Gateway City Library Trail to its live app, MassBook Trails. The Malden Public Library is celebrated on the Gateway City Library Trail for providing access to reading and 21st century gateways to opportunity for their patrons through digital connectivity and programming that enhances life-long learning and cultural assimilation.

Available on the web and as a free download, Mass Book Trails was launched in 2017 with two literary walking tours in Boston and two statewide trails:  Literary Museums of Massachusetts, and African American Writers Heritage Trail. Additional tours are being added as libraries have accepted MCB’s invitation to develop their own local literary, cultural, and historic tours.

MCB, chartered as the Commonwealth Affiliate of the Center for the Book in the Library of Congress, is a public-private partnership charged with developing, supporting and promoting cultural programming that advances the cause of books and reading and enhances the outreach potential of Massachusetts public libraries.

For more information, contact info@massbook.org.  MassBook Trails may be found in the app store and through Google Play.