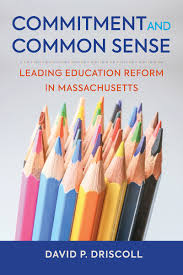 Come join former Commissioner David P. Driscoll for a discussion of his new memoir, Commitment and Common Sense: Leading Education Reform in Massachusetts on Monday at the Library.
Dave will be sharing wisdom from his remarkable career as a math teacher, superintendent and the 21st successor to Horace Mann as commissioner of education in Massachusetts.
The book delves into the key elements of the Education Reform Act, also known as the “Grand Bargain,” that brought billions of dollars into the system along with new expectations and accountability at every level. The changes, ushered in by Driscoll and his colleagues, catapulted Massachusetts to among the best in the world in student achievement.
The event, hosted by the Malden Public Library and Dave’s friends and former coworkers at the Department, is open to the public.