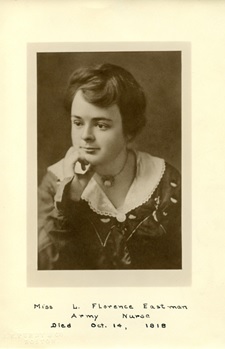 On August 23, 1917, the Malden Evening News ran a small ad inviting all military and naval men of Malden to have their photograph taken, without expense, by local photographer Mr. Carroll of Pleasant Street.  The photographs were said “to become part of the city’s records of the War.”  Soldiers were invited to “go at once to his studio. You will not want to be absent from this historic group.”  This small ad resulted in an unusual photo collection held by the Malden Historical Society, a photographic remembrance of 66 men who gave the ultimate sacrifice during World War I. This collection contains only one woman’s photograph and the simple note, “Miss L. Florence Eastman, Army Nurse, died October 14, 1918.”

Born in 1894, Florence was the only daughter of Russell and Ada Eastman. At age 17 she enrolled at Morton Hospital in Taunton to train as a nurse, and completed advanced courses at Massachusetts General Hospital.  Later, she became a nurse at Malden Hospital.

When the war came, Florence entered the Red Cross, and then in December 1917 enlisted as an Army nurse assigned to Camp Upton in New York.  Florence became the Head Army Nurse of the Isolation Hospital at Camp Mills on Long Island, with 20 nurses and over 100 orderlies under her supervision.  According to the history of American Legion, Florence Eastman Post 280 (based in Mattapoisett), “her devotion to duty, her sympathy for the sick soldiers and her own consistent, cheerful disposition won the respect and esteem of all with whom she was associated.”  In 1918, she received her international passport and would soon begin nursing soldiers on the battlefields of France.

But Florence never made it overseas.  With the advent of cold weather, epidemics were raging in the military camps with scarlet fever, diphtheria, meningitis, measles, bronchitis, and a new pneumonia spreading quickly.  The Camp Mills hospital tents, with about 900 beds, were soon filled to overflowing with sick and highly contagious cases.  The army sought to transfer patients to civilian hospitals, but even that was difficult.  The local railroads refused to transport the contagious soldiers. Instead, the soldiers had to be transported in ambulances obtained by the Red Cross and the Women’s Motor Corps of America on a frigid 35 mile journey to New York through deep snow in almost zero-degree weather.

After months spent nursing soldiers with the Spanish flu, Florence herself caught the disease, and died in active service on October 14, 1918.   She was laid to rest with full military honors, and is buried in Mattapoisett’s Pine Island Cemetery (her father was the keeper of the Neds Point Lighthouse).  Due to a small ad in the Malden Evening News, Florence will always be part of Malden’s record of the Great War.